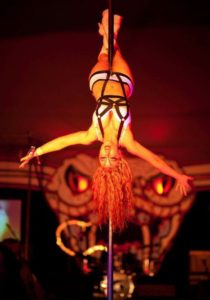 Our final online judge is the amazing Sonia Allcock

Sonia started Pole Dancing in 2006, introduced to the pole by Harmony Rose.
She is well known by her signature move – The Noodle. Sonia won the North Wales Pole Dancing Competition 2010, claiming the Professional Champion title.

She loves to perform & for the last 5 years running has been a resident pole dancer at the Glastonbury Festival even appearing in the Q review magazine & on the TV in the official documentary.

Sonia is a seasoned professional, dedicated to providing top class, high quality lessons. She has also actively pursued and established herself amongst the UK’s top pole performers, having being asked to teach, compete and perform around the country.

Sonia has her own studio – Phoenix Pole & Aerial Fitness in Abergele, North Wales.